Itasca is pleased to introduce the P2P-Sand (Practical Two-Surface Plasticity model for Sands) model, a new practice-friendly 3D liquefaction constitutive model for FLAC3D that is based on the DM04 (Sanisand) model (Dafalias & Manzari, 2004). By revising some formulas without destroying the conciseness of the original DM04 (Sanisand) model, the improved comparative results between model simulations and lab/field observations are obtained under various initial conditions and loading conditions. In addition, the new liquefaction model provides an easier, more practical calibration procedure in terms of in situ data (instead of experimental data), greatly reducing the labor of calibration.

NorSand (Jefferies 1993, Jefferies and Been 2015) is a critical state model applicable to soils in which particle-to-particle interactions are controlled by contact forces and slips rather than bonds, intrinsically incorporating the state parameter so that it captures the behavior of granular soils over a wide range of confining stresses and densities. NorSand requires relatively few soil properties which are familiar and can be estimated from routine laboratory or in-situ tests (e.g., CPT data).

NorSand explicitly captures the full range of soil behavior, from static liquefaction of very loose soils through to dilation of very dense soils. It is suitable for simulating the typical brittle collapse (i.e., flow liquefaction) of a soil structure being over-surcharged, slope-steepened, or sudden rising of pore-pressure. The model is frequently applied to tailings dam analysis.

FLAC3D's implementation also considers the effect of Lode’s angle so that the shear strengths with different second principal stresses can be distinguished. The recent developed feature of principle stress rotation is also incorporated so that the cyclic mobility can be simulated as well as static liquefaction. The results were cross-verified with a VBA-coded spreadsheet for simulations of various densities, drainage conditions, and test types (including triaxial compression and simple shear). 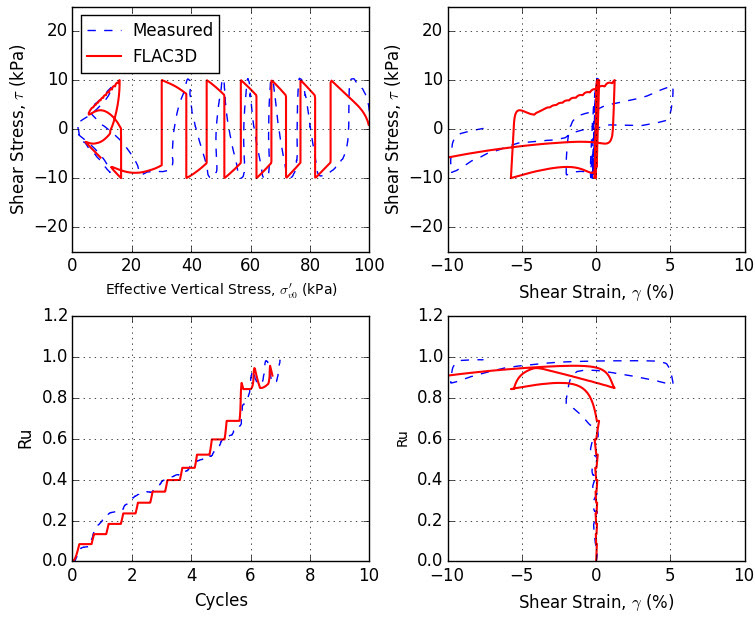 Soft soils generally refer to normally consolidated or slightly over-consolidated clays, silty-clays, clayey silts, and peats. Significant compression, is one of the main engineering characteristics of soft soils, where:

The soft-soil (SS) model has the following features: (a) pressure-dependent moduli; (b) unloading-reloading distinct from the virgin loading; (c) expansion of the volumetric yield ellipse-shaped cap; and (d) conventional Mohr-Coulomb shear failure and tension failure criteria.

The Soft-Soil (SS) model cannot simulate time-dependent behavior, such as the creep that develops during the secondary compression. The creep behavior of soft soil can be significant for some geotechnical engineering problems, e.g., embankment construction. The Soft-Soil-Creep (SSC) model (Vermeer and Neher, 1999) takes time-dependence into account so that the volumetric cap expands to a new position within a specific time (called reference time in the model) instead of instantaneously as in the SS model. Furthermore, the cap will never stop expanding — although with a continuously decreasing expansion rate. The expansion rate will be determined by the value of the current OCR. When OCR is high, creep deformation is neglectable. The SSC model has the following features: (a) secondary time-dependent compression; (b) pressure-dependent moduli; (c) unloading-reloading distinct from the virgin loading; (d) memory of the equivalent pre-consolidation pressure; and (e) degeneration to a conventional Mohr-Coulomb failure criterion when the creep time step is zero.

The option of small-strain stiffness is added to the Plastic-Hardening model to take strain-dependency of the modulus into account. Whereas the PH model assumes an elastic material behavior during unloading and reloading for very small strains, with the small-strain formulation soil stiffness behaves nonlinearly with increasing strains. Inclusion of this option is believed to improve the accuracy of the simulated deformation. The PHSS formulation is enabled by the model property flag zone property flag-smallstrain on.