As part of Itasca's 40th Anniversary celebrations, we invited our software users to submit in their model plots that best showcased the capability, flexibility, and beauty of Itasca software for one of four themes: 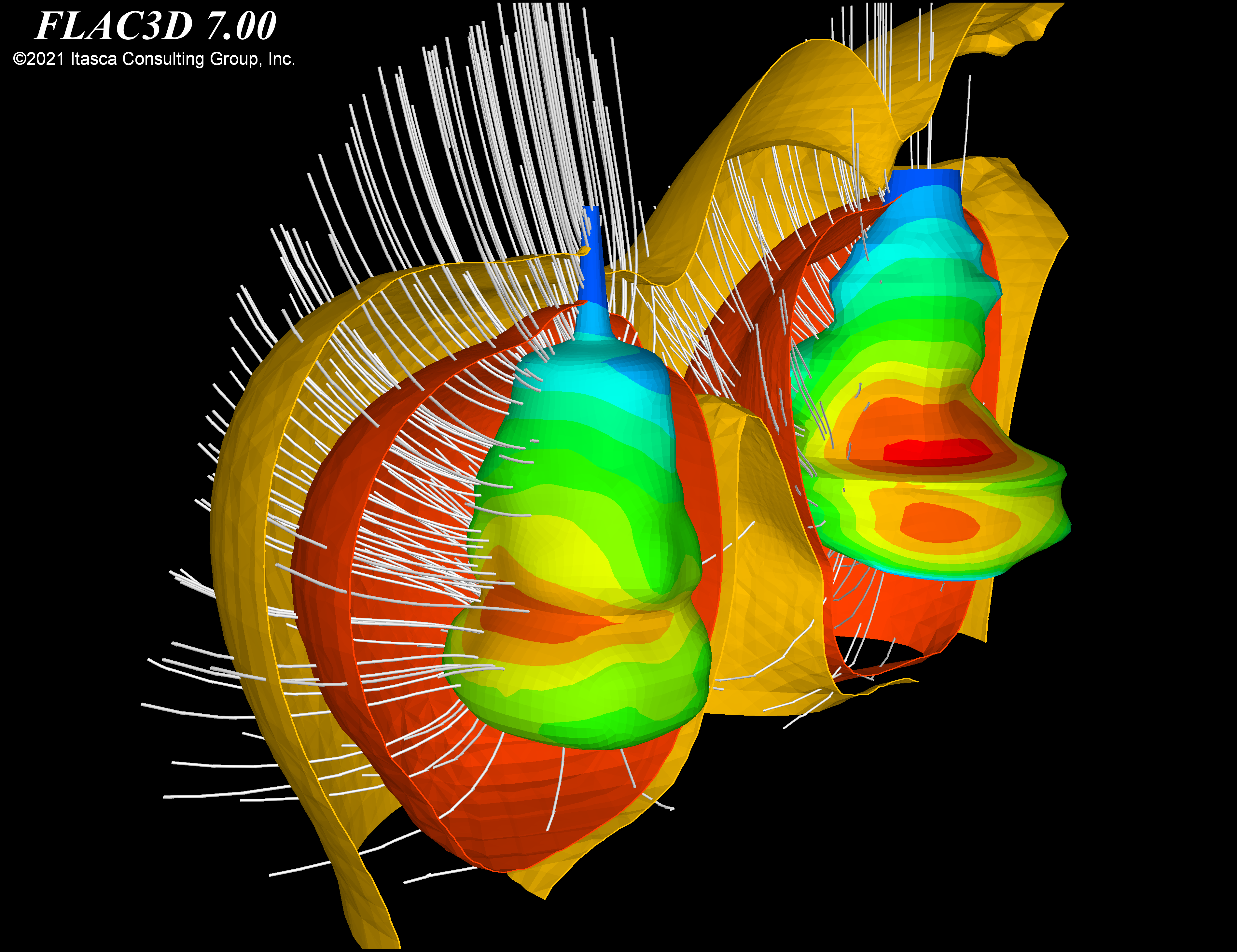 Magnified horizontal soil displacement showing the pile pinning effect. These figures are related to an NSF-funded project on a 3D modeling of a pile-supported wharf subjected to liquefaction-induced lateral spreading. 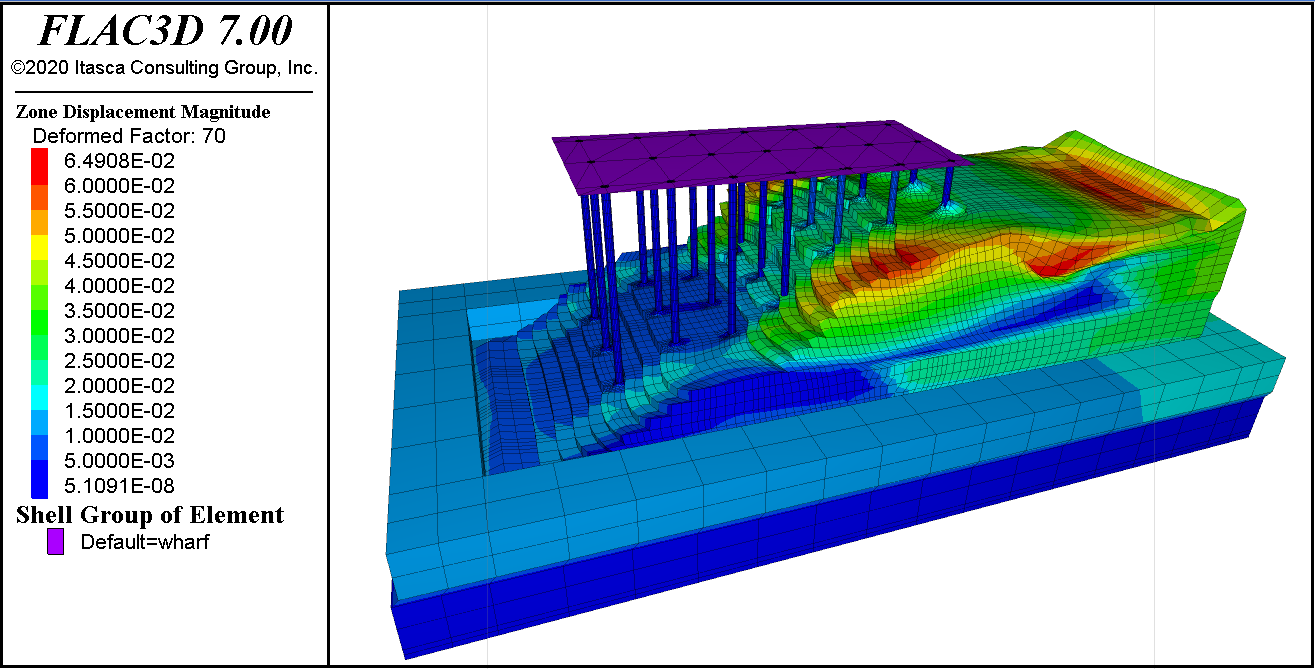 Gravity Dam Radial Gates Opening Perspective: the displacements of the gates have been calculated in large-strain mode imposing a constant rotational velocity and modelling the trunnion-gate structure interaction with interfaces. In the figure, the initial and the final position are depicted. The gates are also loaded by water pressure. A FISH function was implemented to correctly apply water pressure and rotation taking into account the update of the geometry of the model. 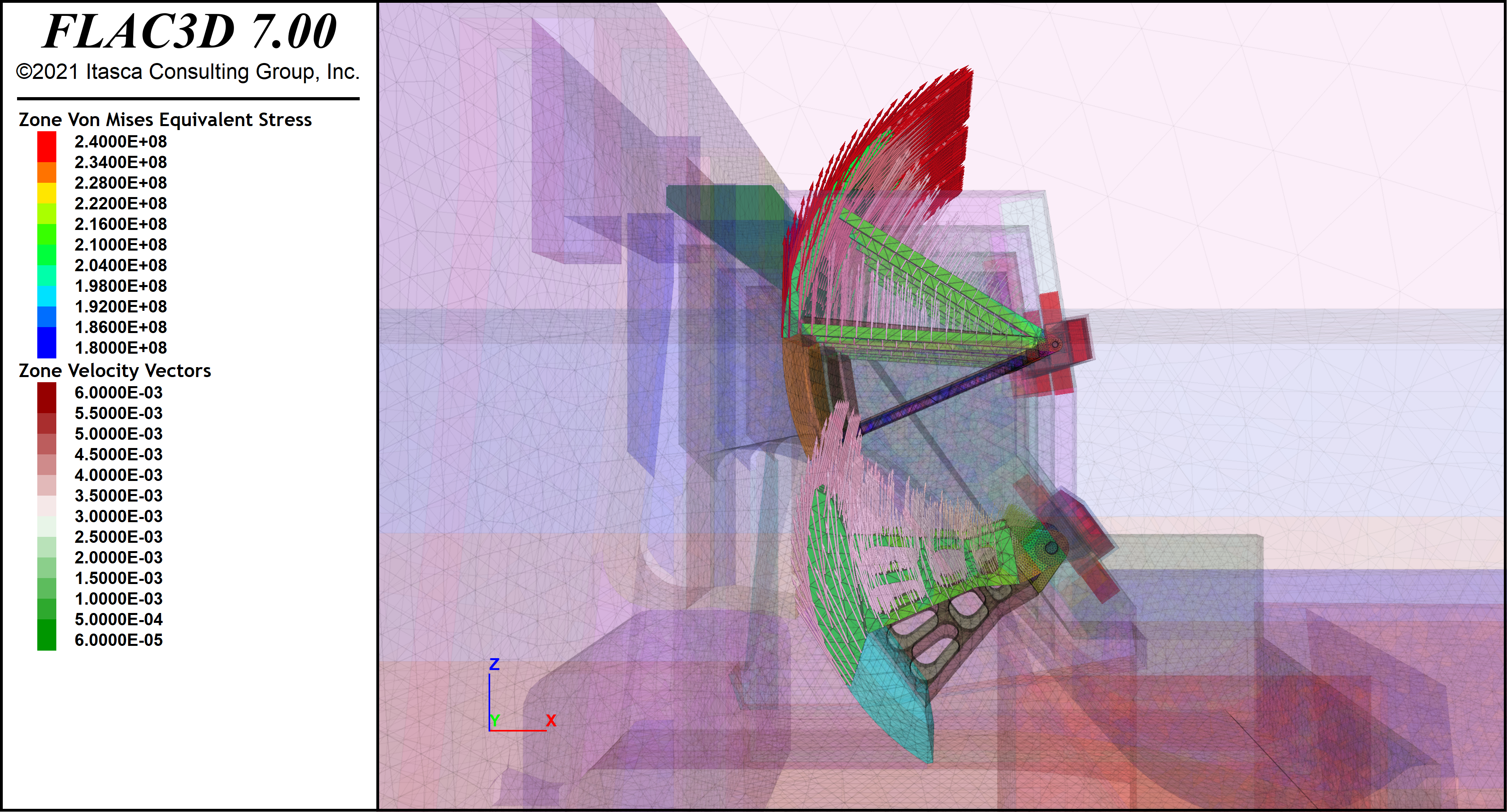 And Now for Something Totally Different

The use of DEM to model packaging arrangements during apple transport is illustrated. The presented model can predict the location and extent of bruising on an individual apple. Balls together with the Linear Parallel Bond Model are used to simulate the presence of trays. Apples (modelled using clumps and rendered with their associated .stl surfaces) are generated in an industry standard arrangement. Hereafter, balls are generated using the spherical coordinate system, around the apples, and the Cartesian coordinate system for the tray horizontals and subsequently bonded. Trays are rendered using the parallel bond contact state and represented as cylinders. 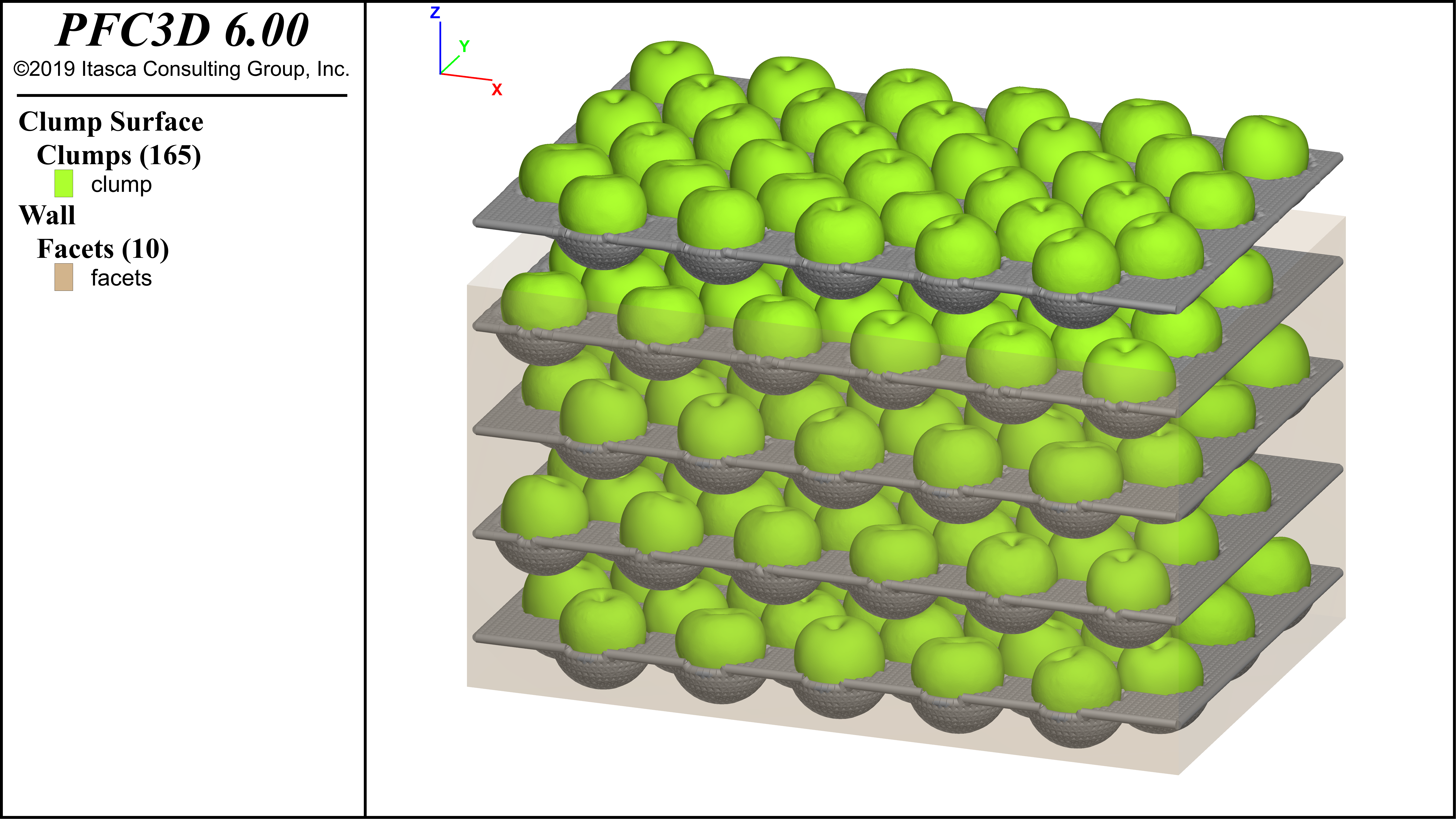 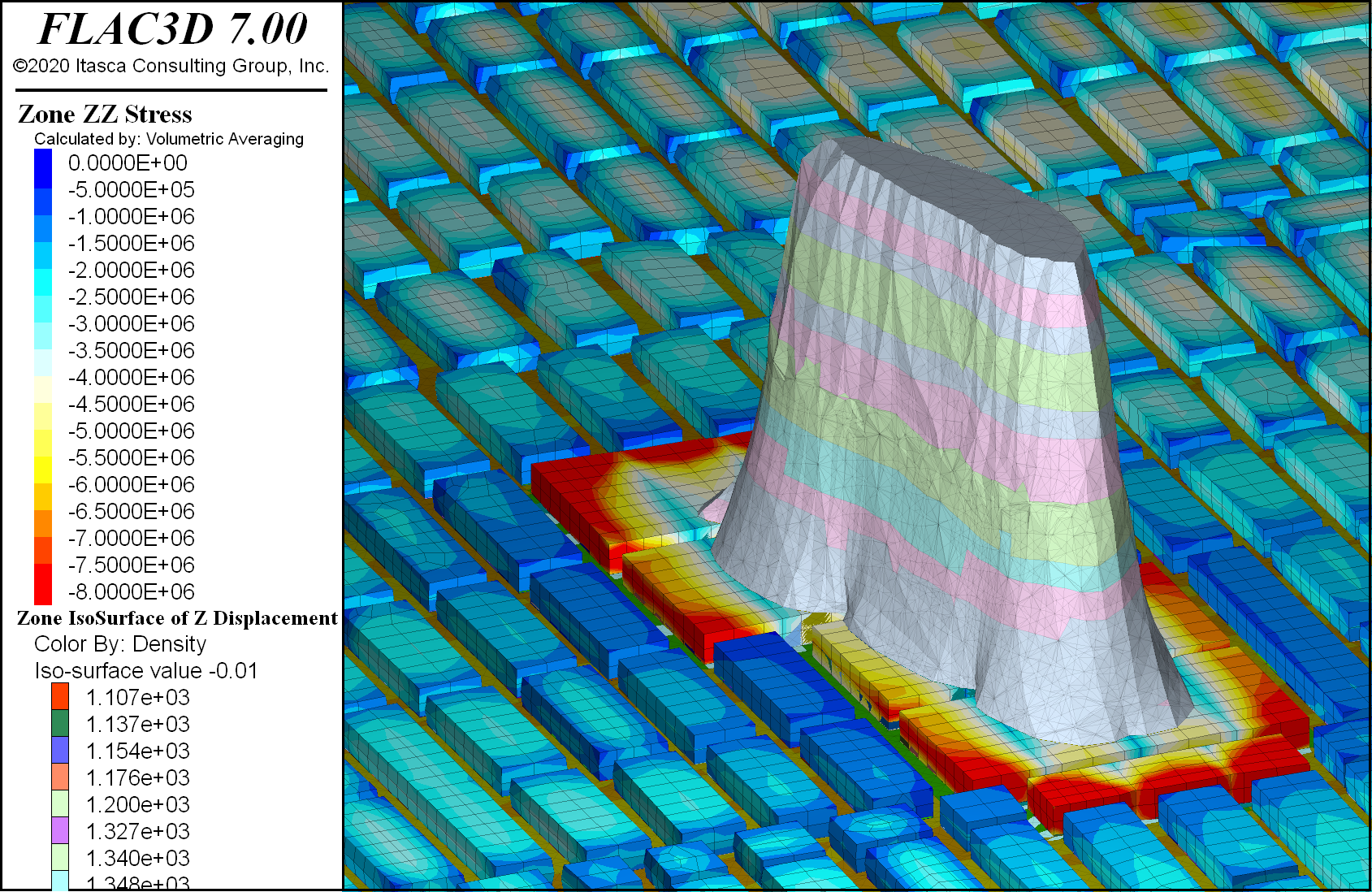 Subsidence assessments are required for new buildings in the Newcastle CBD area in Australia. The CBD is underlain by old coal mine workings, subsequently the coal board requires assessments to be made on the adequacy of grouting measures prior to construction. The assessments conservatively assume a 'pillar run' in which the surrounding pillars are softened to yield state. The plot shows the vertical stress in the grout/existing pillar mass with an isosurface of 20mm subsidence. This is not your typical subsidence plot and has been labelled as 'reverse subsidence' as the movement with in the isosurface is 20mm or less. The overburden where the isosurface is located is the anisotropic elastic model and colors of density have been changed to visualize potential changes in the strata above the workings. 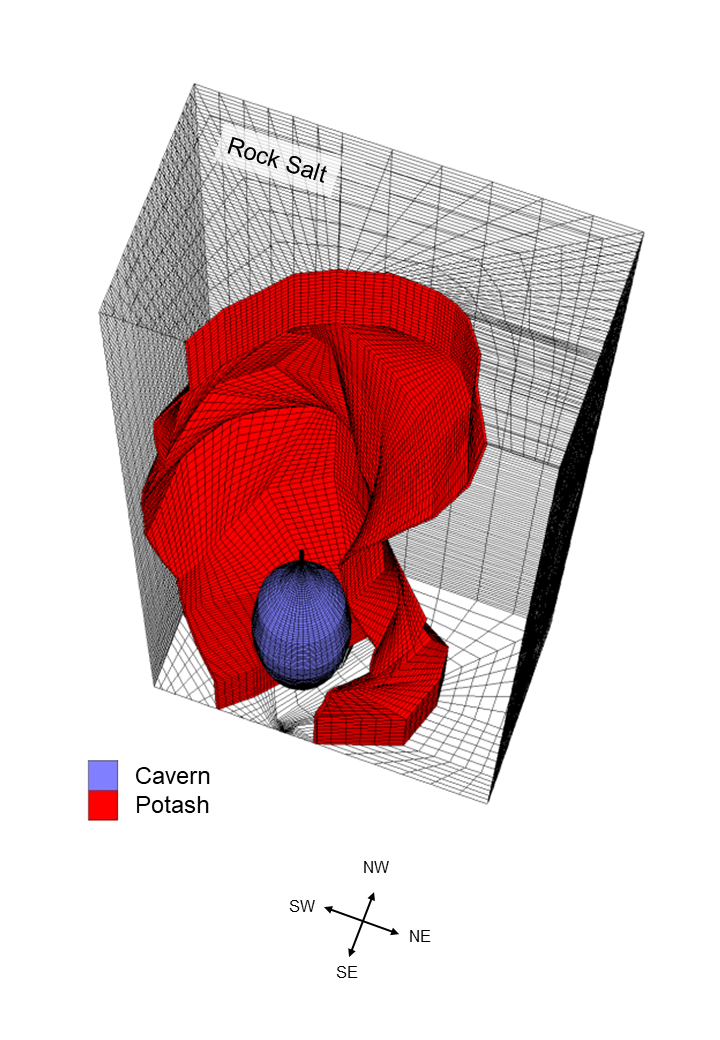 The contours indicate rupture velocity normalized to the rock mass shear wave velocity (Vr/Vs) in a 3DEC simulation of a Mw 7.0 earthquake on a vertical strike-slip fault. The arrows indicate the rupture front propagation direction, and the black dot indicates the hypocenter. The fault plane is 40 km in the along-strike direction and 20 km in the down-dip direction. The average discretization edge length is about 90 m in the volume adjacent to the fault plane and the model contains approximately 140 million finite difference zones. 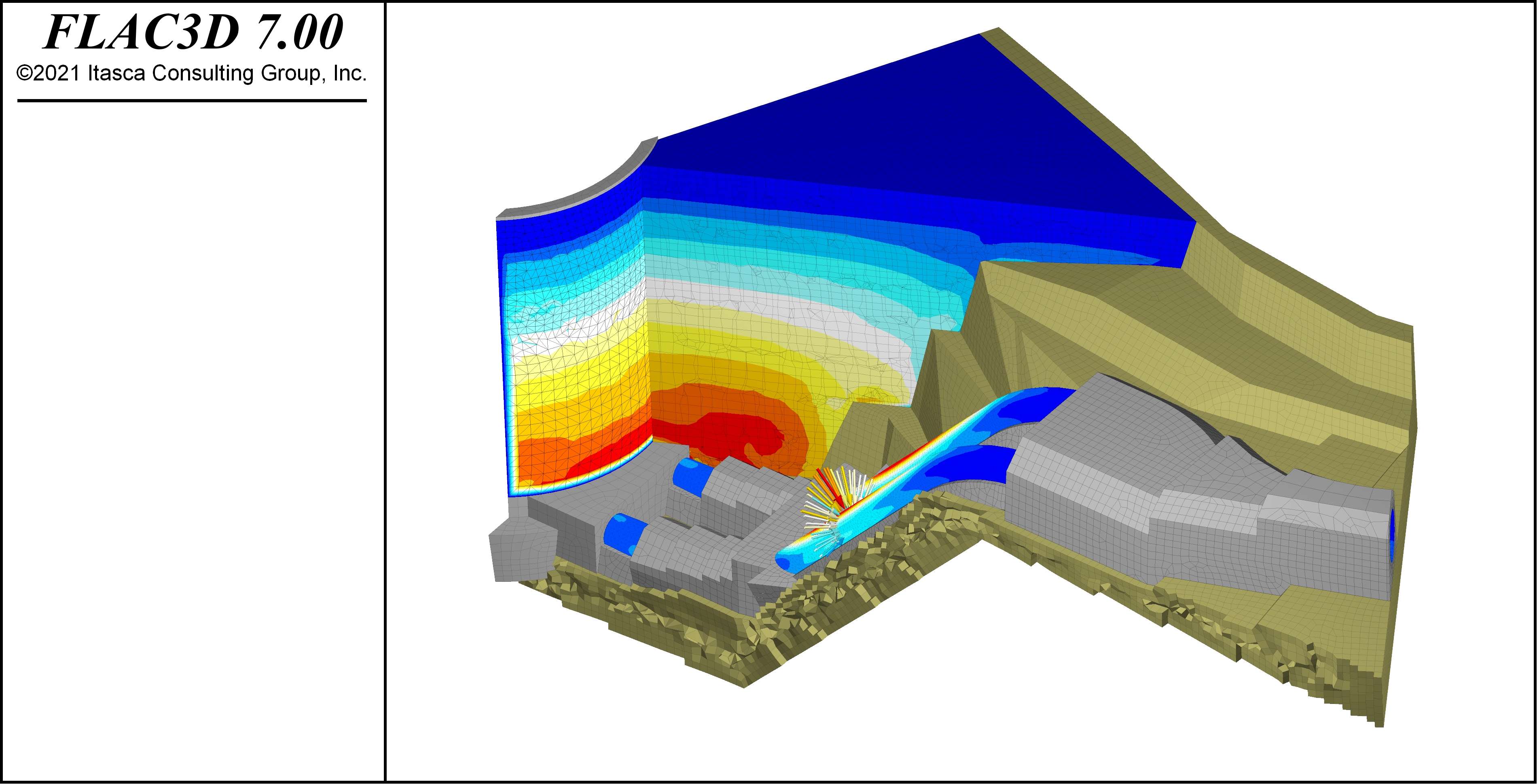 This FLAC3D model was developed to estimate the loads applied to the buried penstock of a Pumped-storage hydroelectricity project. In the model are represented the penstock (liner element), part of the powerplant, the bedrock, the concrete structures and the rockfill surrounding it (volumetric). The results being plotted are mainly normal or vertical stresses. The vectors were created to allow a better understanding of the loads applied to a cross section.