A confidential mining client was interested in evaluating various potential future solution-mining scenarios using a numerical model in order to assess potential ore recovery, capital costs, and cavern lifetimes, as well as to overall optimize the proposed mine plan. Modeling of solution mining requires that the key processes controlling the mineral dissolution are modeled; however, there are numerous factors that complicate the details of the dissolution process that are impractical or impossible to account for in a model. A robust data set was available from historical operations at the site. The historical operations used similar solution-mining methods to those that were being evaluated for future operations. Models that were adequate for forecasting and mine-plan optimization were created by developing a simplified numerical model and then systematically adding complexity to that model until it produced reasonable simulations of the historical brine concentrations (grade) and production rates.

Itasca developed three separate models and used a decoupled modeling technique to simulate the solution-mining operations. An overall average dissolution rate was estimated based on the initial production rates. That overall average dissolution rate was then applied in a surface area model (SAM), which was used to estimate the change in surface area of the solution cavern as a function of time.

The predictions from the SAM were then used as inputs to a simplified, zero-dimensional model (ZDM) that predicted the recovered brine grade as a function of time (i.e., it did not calculate brine grade at discrete locations along a flow path, but rather solved the integrated dissolution occurring along the entire flow path). Additional variables were then systematically added to the ZDM to evaluate their individual influence on the model results. Input variables that were included in the final ZDM included: 1) the influent pumping rate as a function of time, 2) the chemical composition (grade) of the influent brine, 3) the estimated surface area from the SAM, and 4) a kinetic dissolution rate that was defined as a function of the chemical composition of the brine.

The use of a heated injection brine was also modeled. A one-dimensional thermal chemical flow model (TCFM) was developed for the variable-temperature simulations. The TCFM also accounted for heat loss to the surrounding rock and the influence of temperature on dissolution rates and saturation concentrations. The TCFM outputs included two-dimensional cross sections of rock temperature along the borehole, estimates of produced brine temperature and grade, and cumulative ore recovery (all as a function of time).

Itasca developed a modeling approach to simulate solution mining using a series of customized numerical models. The combination of the SAM and ZDM was verified by comparing model predictions with the operational data and demonstrated that the model predictions were in close agreement with the observed grade and ore recovery (Figure 1).

A thermal model was used to assess potential recovery and grade associated with an alternative design scheme involving high-temperature injection. Due to additional complexity and insufficient field data to perform the same type of validation as was performed for the SAM and ZDM, the thermal model results were more speculative; however, the model results provided important insight related to the system response to heated injection and helped support the selection of the preferred mine plan. 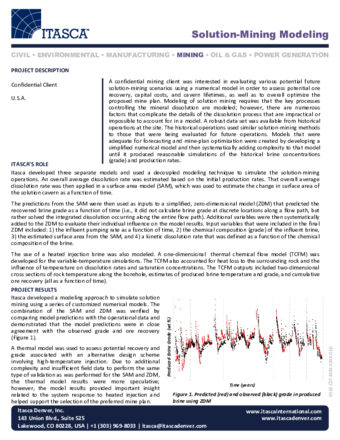