For over five years, Itasca Chile SpA (Itasca) has developed and continuously updated, the 3D numerical groundwater flow model for a world class open pit mine in Chile. This model is primarily used to estimate pore pressure distributions for past, present and predictive stages of the pit excavation, which are subsequently used for 3D slope stability analysis.

In 2019, as part of a yearly cycle, Itasca carried out the third update of the numerical groundwater model for the current Life of Assets plan for the mine. This task allowed keeping the numerical model up to date with new hydrogeological data gathered for the pit, and to further adjust it to the field observations.

With the new and updated model, new predictions for future stages were made, and new mining and drainage plans were evaluated from a hydrogeological point of view.

In order to update the existing 3D numerical groundwater model, and obtain pore pressure distributions, Itasca’s role was comprised of different tasks. Firstly, updating of the model entailed the incorporation of new data regarding hydrogeological units, structural models, water level measurements, hydraulic test results, pumping wells, drains and other drainage systems. Specifically, for the 2019 model, new measurements between 2017 and 2018 for pumping wells and piezometers were considered, while a new block model was used, along with new geological structures and drain groups.

After the incorporation of new data, the model was recalibrated to make sure it reproduces the new measurements. The calibration spanned from Jan-1990 to Jul-2018, thus extending the calibration period by one year with respect to the previous model. A sensitivity analysis of all hydrogeological units and their corresponding parameters followed the recalibration.

Later on, alternative mining plans were modeled. A “Do Nothing Else” scenario was modeled first, corresponding to a predictive model without additional dewatering systems. This model run represented the “worst case” scenario from a hydrogeological perspective, and its results were subsequently used to assess the effectiveness of the different proposed mining and dewatering plans, with special focus on the Optimized plan. For the Optimized plan, 3 different pumping scenarios were modeled, with different pumping rates per well, which were 2, 3 and 5 l/s. Finally, the pore pressure fields from all scenarios were provided to the geomechanics team to be used in 3D slope stability analysis.

The incorporation of new data and the subsequent recalibration of the model succeeded in a slight improvement of the model error metrics in comparison to the previous model, with the Root Mean Square (RMS) error dropping from 37.4 m to 36.5 m, while maintaining its Standardized RMS (SRMS) at 8.4%.

Compared to the “Do Nothing Else” run, the Optimized mining and dewatering plan appears to control seepage satisfactorily. The model run with pumping rates at 2 l/s reduces the seepage zones, while the 3 l/s rate run has a bigger impact. The latter also meets the depressurization targets of keeping the water table 15 m away from the surface. Furthermore, for the 5 l/s rate run all previously mentioned effects are amplified, pointing to the drainage system being effective. It must be stressed, however, that at large depths, the model only contains a single hydrogeological unit, not representing the changes in fracture density with depth, causing seepage estimates at greater depths to be of higher uncertainty. This, coupled with the increase in uncertainty at further dates in the future, points to an even greater uncertainty in the long-term results of the model. Thus, as a mean of Improving the model, Itasca recommended the revision of the conceptual hydrogeologic units, for fracture density to be considered for future models. 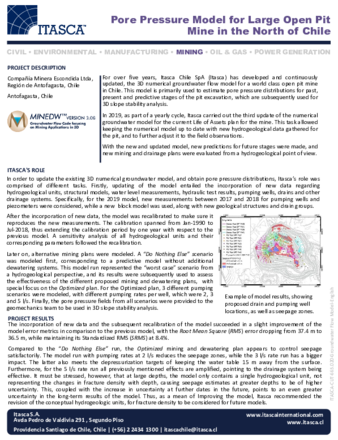