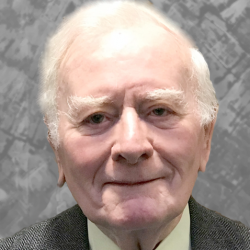 Dr Fairhurst obtained his Ph.D. in Mining Engineering from the University of Sheffield, UK in 1955. He joined the University of Minnesota faculty, School of Mines and Metallurgy in 1956, serving as Head for several years to 1970, when the Mining program was joined with Civil Engineering to form the Department of Civil and Mineral Engineering. He was Head of the joint Department from 1973-87, and retired in 1997. He supervised 25 Ph.D. students on a variety of topics in basic and applied rock mechanics

As a private consultant (and Senior Consultant with Itasca since 1981), Dr Fairhurst has more than 70 years of experience in min­ing rock me­chanics and has con­sulted on rock stability problems for tunnels, dams, mines, and exca­vations through­out the world. He has also been actively engaged for almost 50 years in the US and internationally, in the problems of geological isolation of high and intermediate-level nuclear waste. His current emphasis is on the mechanics of fracture propagation in naturally fractured rock under explosive loading and the effective stimulation of geothermal reservoirs.

In December, 2013, he was inducted as Officier, Légion d’Honneur, France.

In February 2018 Dr Fairhurst received the SME (Society of Mining Engineers,USA) President’s Citation Award “…. for outstanding contributions to the science and technology of Rock Mechanics which is fundamentally integral to SME's multiple disciplines.”

From July 2018-June 2019 he served as Chair, Section 11 (Earth Resources Engineering) of the US National Academy of Engineering.

A more detailed CV can be supplied upon request.

This page will host assorted papers, articles and thoughts from Professor Fairhurst that are relevant to today's geomechanics industry.

Limits to Underground Mining at Depth (in the context of global demand for minerals), 2017. Fairhurst, C, and J.L Furtney, presented at the SME Annual Meeting in Minneapolis, February 2017.

What is the Strength of a Rock Mass? Fairhurst, C., 2009. Originally published at 5th Colloquium on ‘Rock Mechanics –Theory and Practice’, Ōsterreichische Gesellschaft für Geomechanik. November 26th and 27th, 2009, Vienna.

Cundall, P. (1974) Rational Design of Tunnel Supports: A Computer Model for Rock Mass Behavior Using Interactive Graphics for the Input and Output of Geometrical Data. This research was funded by Office, Chief of Engineers, Department of the Army; Prepared under contract DACW 45-74-C-0066 with University of Minnesota, Minneapolis, Minnesota.